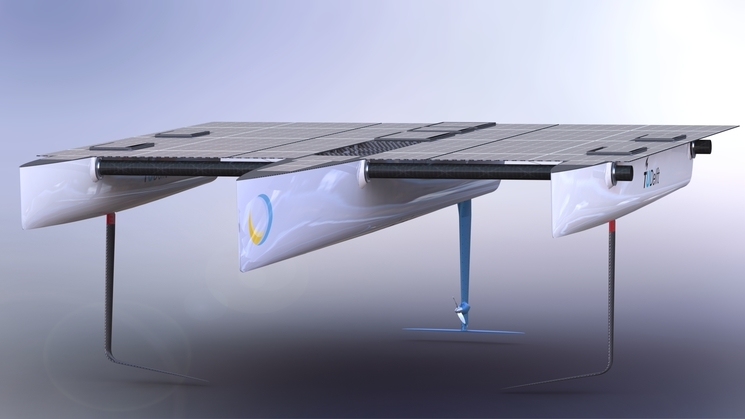 In the summer of 2018 28 enthusiastic and ambitious students of the Solar Boat Team of the TU Delft (Technical University of Delft in the Netherlands) started to design a boat that sails only on solar energy. The team has two goals for summer 2019: win the Monaco Solar & Energy Boat Challenge (5-6 July) and set a world record crossing the English Channel. This year the team decided to compete in the offshore class in Monaco instead of the solar class. The consequence of this decision was that the dimensions of the boat had to be enlarged. The result was a gigantic trimaran. VABO helped the TU Delft Solar Boat Team building this boat.

Eager to realise the goals for 2019, we were looking for a location where the boat could be produced. The search for a location needed to be arranged at short notice. Because of the size of the trimaran most companies didn’t have sufficient space available. Luckily VABO Composites did. After the arrangements were set, the Hull & Body department of the TU Delft Solar Boat Team knew what their accommodation was for the first three months of 2019. The Hull & Body Department was going to work with carbon fibre at VABO in order to get the lightest and strongest hull possible.

The team had arranged housing with a local holiday park so there was no need to drive from Delft to Emmeloord every day. Still, the eight students needed to get used to waking up at six in the morning. But soon this was not a problem anymore and the focus was only on production. In the first week we brought two alumni from the 2018 team with us so they could show us their method of producing a carbon product. Next to our alumni we could always count on Willem, the team leader at VABO, to help us with the problems we faced. It was clear VABO had a lot of experience and we gradually used the valuable tips and tricks they gave us. The hatches and doors that were stored in the hall looked really tight. After a month VABO started to make a jacuzzi for a private yacht. It was interesting to see what can be produced with carbon and we were able to do it for ourselves!

We started off with producing the portside side hull. It was of course more difficult than the wet-layup tutorial we had had back in Delft. In the mould we laid teflon, a chemical substance with a low friction coefficient, so we were able to release the product from the mould in the end. Now, the first carbon layers could be laid together with the core material and finally the inner carbon layer. This was actually more pleasant than a wet lay up because we used pre impregnated carbon so there was no use for epoxy flying around. After curing our product in the oven the teflon did not release as easy as we hoped but luckily we had Willem with five solutions. Within the hour the first of three hulls was released and whole VABO cheered because we could finally stop hammering on our mould in order to release the side hull.

Next to our stand in the hall of VABO was the solar boat team of the university of Twente. It was encouraging for both parties because information could be exchanged verbally and visually. If we noticed that their production went faster at some points we tried to copy their method and vice versa. Despite all the hard work we were also able to socialise with both teams at each other’s accommodations. Eventually, Twente had already finished their boat and thus we were quite lonely in the hall. This was fortunately for us, because at this point we had to produce our solar decks which took up a lot of space.

At the beginning of April almost everything was back in Delft. When the main hull drove into the Dream Hall the other student teams gazed with amazement because it was such a massive structure. We were really proud and satisfied with the things we produced at VABO Composites and we want to thank them a thousand times for giving us the opportunity to realise our solar boat. Of course, all good things come to an end, but hopefully this will not be the last time that the TU Delft Solar Boat Team and VABO work together!

In the final two months we are installing the engine, battery and finishing the cabling. When this is completed, the boat will be tested in the water and be prepared for the challenges in the summer. You will definitely hear from us and hopefully because we won the Monaco race and set a new record on the crossing of the English Channel!