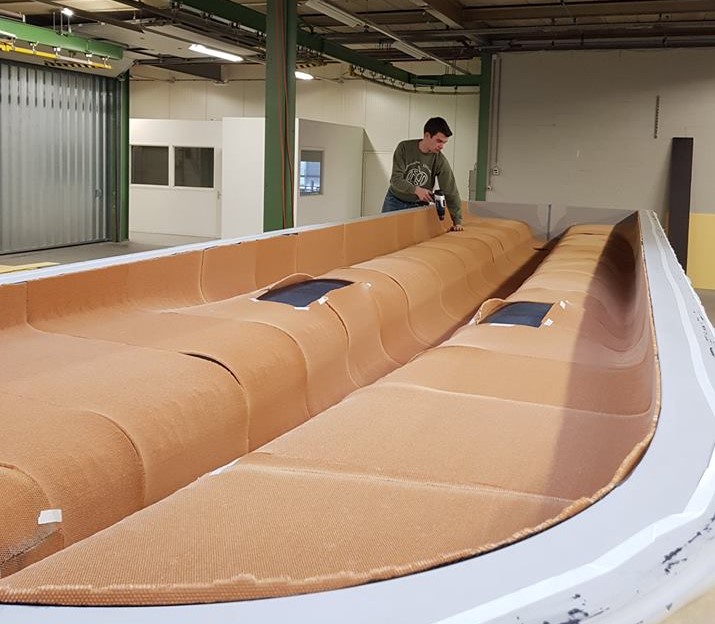 For team structural of Solar Boat Twente, Monday 7 January was an exciting day. The workshop of our team was moved from the Marssteden in Enschede to a temporary home in the Noordoostpolder. For six weeks, the structural team of Solar Boat Twente worked, alternated by teammates from Enschede at VABO Composites to build the hull of their new boat. After long working days and some improvisation, a good result obtained. Bulkheads, the hull and a top deck were laminated with carbon prepreg and cores of honeycomb and PVC-foam. Because of the enormous length (8 meter), even the already large oven at VABO Composites had to be expanded for the curing. Eventually, the hull is finished in six weeks, with a resulting weight of 45 kg, almost 10 kg lighter than the predecessor!

The largest part of the new boat was made possible by the facilities of VABO Composites, but a full solar boat consists of more than the hull. The boat of the 14-headed student team of the University of Twente also contains, next to of course the solar panels, optimised hydrofoils. Thanks to these, the boat can fly up to 50 km/h!

With their hydrofoil solar boat, the team participates in several races. Not only national, but also international the wants to make the most of it. During the “Solar and Energy Boat Challenge”, the world cup for solar boats, Solar Boat Twente wants to compete for a place in the top-three in the port of Monaco. By participating, the possibilities of solar energy in the maritime sector are given attention. See also www.solarboattwente.nl for more information about Solar Boat Twente.